Carr’s novel goes back to 1960
Eva Eden is a famous actress, but she gets better when, in Nazi Germany, she speaks well about Nazism. Girlfriend of Hector Matthews, she is invited with him to Berchtesgaden, Adolf Hitler’s Kehlsteinhaus . While is there, Matthews, a handsome man, that he has never suffered from dizziness, falls from terrace, smashing into the ravine below. It ‘obvious that this is an accident, because there would have been no reason to commit suicide, and most importantly Eve was a few steps away from him as witnesses Gerald Hathaway and Paula Catford, there too they say, what of the rest supported by the Nazi present there. That, however, would have had good reason to lie and do a favor to the beautiful Eva, who rumors say was the cause of death of Mathhews.
Years later, Eve, who were married in the meantime with the famous actor Desmond Ferrier and lives in Geneva, would like to permanently remove all malicious gossip on her behalf. That’s because she calls the two witnesses of the distant calls 1939 episode of Berchtesgaden.  She also invites Audrey De Forrest, of which is infatuated Philipp her ​​stepson and son of Eve Desmond. Audrey actually has accepted the court of Philipp almost out of spite against Brian Innes, a painter who lives in Geneva, who does not want to recognize being in love with herr and who is a friend of her father, who, knowing the sinister reputation of Eve, asks Brian to prevent her daughter to accept the invitation of Eve. In fact he is one of those who believe Eve have been the cause of the death of Matthews, and now strangely the other two invitees are those who were present seventeen years ago to the death of the actor. Audrey does not accept and go to Geneva. When Eve Ferrier goes at the Hotel du Rhône, where Innes is having dinner with Sir Gerald Hathaway, a freak accident occurs: a bottle that should contain perfume, that is in her bag, actually contains, without her knowledge, sulfuric acid. The day after this strange incident, another more serious happens, when Eve, in his villa, falling from a high balcony, smashes into the ravine below, as if she had been thrown by someone; only Audrey is close, but not enough to push it. Strangely, this death repeats that of Matthews.

Desmond Ferrier, the husband of Eve, father of Philipp has meanwhile called Gideon Fell, his friend to unravel the tangle, which the mammoth Fell will make not before an attack by a masked character, in The Cave of the Witches, a distinctive place in Geneva, has narrowly shot Audrey.

Classic novel by  Carr,it is not focused on a Locked Room, as usually for him, but on a ‘fascinating variation of the crime impossible: that is how we can kill at a distance and with which weapon, without leaving  a trace, and making sure that all leave thinking that this is an accident. This variant of impossible crime had already been examined by Carter Dickson, aka Carr, previously, in 1939. And in 1939, becomes the link between the novel today and the novel  yesterday, between John Dickson Carr and Carter Dickson between the two sides of the same coin. It ‘s like Carr, fifty-three years old, he wanted to resume a speech, reaffirming his identity, and tying In Spite of Thunder in glove with each other: The Reader Is Warned, a novel  of series by Henry Merrivale, which debates whether it is true that a murderer could kill at a distance, creating the “perfect crime.” But, as two novels are linked through time, so too in the same novel presented today, two crimes repeat in time, it would seem at the same way: in fact, through the actual crime, it reiterates the memory of another drama happened in the same year in which Carr / Carter Dickson had published his novel, precisely  at 1939.

Obviously Carr wallows in situations of altered historical flash-back: he was able to invent a plausible context, to describe with vivid colors and to bring down the reader in a unique atmosphere once again: that at Germany of Nazi, a few months before the invasion of Poland. In my opinion, Carr was the greatest historical novelist of the detective genre, in absolute. His technique is different from the more commonly followed today, at least in Italy: while today there’re the artists and literary detectives (Leonardo Da Vinci, Dante, Pico della Mirandola) in England still, the historical Mystery, derived from Carr , in which the setting is recreated, faithful as possible, in which moves a certain character: it is the case later in The Devil In Velvet , or the Witch of the Low Tide, and in all those novels almost all without character fixed, in which Carr admirably recreates a historical event . However, Carr, in the novel I present, creates a synthesis: he fastens the past to the present, and it does so through the reenactment of certain characters: so he recreates the time immediately before to the beginning of World War II.

How to do it? He Introduces a certain environment (in our case, is the Adolf Hitler’s Eagle’s Nest, the Eagle’s Nest at Berchtesgaden in the Bavarian Alps, the famous retreat of Hitler on a mountain peak (with a personal elevator) in which the dictator received usually representations (Mussolini endowed him with a fireplace adorned with Italian marble red) and it does so in a suggestive manner. Even, he  puts around Eve and Matthews, on the terrace  you see in some vintage photos with Hitler, Eva Braun, Goebbels,  the Scharführer Hans Johst with some other minor characters nazi. Now that Hans Johst was or was not Scharführer do not know nor I don’t know if the rank had been given as a sort of recognition (it was the first instance of officers of the SA and then one of the degrees lower of the SS, a kind of Sergeant), but it is certain that Hans Johst is not a subject invented: in fact Johst was in Nazi Germany what at the Soviet regime was Mayakovsky, the poet of the regime.

It ‘good to say that even the modus operandi of the murderer, his instrument of death, the weapon is, as improper and already introduced in a radio play in 1942, even before Fell clarify speaks how the murderer did to kill distance, it is announced in a hushed tone, as if Carr gave to the attentive reader a clue how to direct his inquiry, softly. In fact, Carr gets to tell to Paula Catford, the story of a famous crime, for which Switzerland is famous, that by the Empress Elizabeth of Austria in 1898: Empress was stabbed by a stiletto so  she did not notice of it and so she walked not knowing she was already virtually dead: in fact the dagger had pierced his heart and lungs, causing internal bleeding important, so that in a few moments the victim died . Now, through this re-enactment, in my opinion, Carr subtly provides an important clue to the attentive reader. It’s as if he spoke : “Look, even in this case it is not murder at a distance, but murder by something that has been done before, of which the victim did not notice, except when she died” . And remembering  the famous murder in Geneva Carr once again makes a flash-back, resumes, things he talked years ago. 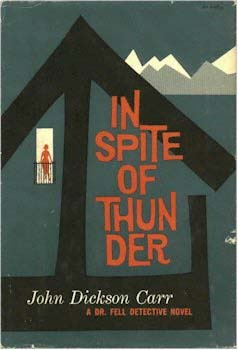 As in my first short essay published on the blog Mondadori, whom many readers remember, focused on the first 4 stories by Bencolin, I highlighted the similarities between Bethune and Bencolin, and then between the novel of 1972, Deadly Hall, and the 1930 novel, It Walks by Night (http://blog.librimondadori.it/blogs/ilgiallomondadori/2009/09/07/la-prima-produzione-di-john-dickson-carr-i-quattro-racconti-di-bencolin/ ), So Carr in this novel makes another flashback. In fact, recalling the case of 1890, it is as if he put forth a temporal bridge and returned back in time, when into He Who Whispers 1946, he had spoken about a similar crime: the play of mirrors are always lurking in Carr! In fact, in the novel of 1946, you talk about Dr. Antoine Georges Rigaud, who was supposed to hold a conference about a famous crime involving a British family in Chartres, France, in 1939 and who later died in mysterious circumstances, on the roof of a tower. That’s again year 1939. It’s as if it’s  a catalyst! And how can we recognize the evident similarity between Rigaud from He Who Whispers and Grimaud from The Hollow Man? Not only. The game of mirrors between these two novels is clear: Fay Seton,  character who is in the first of two novels, was accused by slander from the populace about Vampirism. And what is one of the themes from the second? Vampirism. It then occurs in a radio play, Vampire Tower, a title that would have to be that in place of The Hollow Man, if at the beginning of the first draft was later followed up. Instead, as many people know, after the false start of Vampire Tower (the novel, not the radio play!), in Which had fallen back Bencolin, Carr chose to change register and to enter Dr. Fell:

“After the false start in Vampire Tower (which he had rewritten as The Three Coffins), Carr realized that he could not bring back the satanic Bencolin who had enjoyed tormenting his prey. The original Bencolin of Carr’s college stories, however, had been gentle, amiable, and even a bit shambling. If Bencolin were to come back to life, he would have to be that original Bencolin” (Douglas G. Greene, John Dickson Carr: The Man Who Explained Miracles, p. 173).

And which is the present character  in The Hollow Man / The Three Coffins, as in Vampire Tower? Dr. Grimaud. And what does it speak about? About a poisoner.
The poisoners are largely the work of Carr: how can we forget The Bourning Court? Look at the case in In Spite of Thunder, what do they think about those who believe Eve the Mathhews killer? Then you will understand that the poison has a role  in this novel, even if Eve was not a poisoner.
Yeah, a poison. Used to kill at a distance. So the poison is the weapon. But,  How did the poison arrive at destination if no trace of poison, was there ?
But, why is beautiful this novel?

The value of the novel lies not so much in the atmosphere or in solution (taken from a radio play: how much grace in those wonderful  radio plays!) but at the parsiflage by  the grand old man, which confuses the waters with a lot of misleading speeches, in which you say nonsense to no end: you think who  could be the culprit, you analyze the possible candidates, you delete them one at a time but you can not figure out who is the real culprit, which is there in the corner, which confuses the waters with the odd attempt to Audrey. Then, Carr The Great, extracts  from the cylinder an offender absolutely plausible and at time invisible. It explains so many things. Among the Carr’s novels, of the Fell’s series, of recent years, In Spite of Thunder is the best, no doubt. I read it a few days ago after many years, and the pleasure was greater.